www.Florida-Mortgage-Lenders.com
All Information is subject to change without notice. 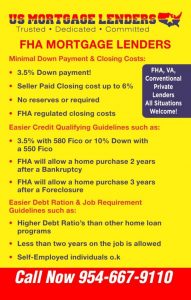 Florida mortgage lenders each have their own post-bankruptcy waiting periods which determine how much time must pass after filing bankruptcy before someone can qualify for a Florida mortgage. Chapter 13 bankruptcy in Florida can be less of a challenge compared to Chapter 7, with smaller waiting periods. The reason for this difference is that Chapter 13 bankruptcy includes a repayment plan to pay back at least a portion of the debts compared to Chapter 7 which wipes out all debts and does not contain a repayment plan. In Florida, a bankruptcy filing alone can take as long as 3-6 months before the negotiation between the debtor or the debtor’s counsel and the creditor. The start of Bankruptcy seasoning period starts when the Southern District of Florida can finalize your case and start your Chapter 13 repayments.

Answer A Chapter 7 bankruptcy (liquidation) does not disqualify a Florida mortgage applicant from obtaining an FHA-insured Mortgage if, at the time of case number assignment, at least two years have elapsed since the date of the bankruptcy discharge. During this time, the Borrower must have:

An elapsed period of fewer than two years, but not less than 12 months, may be acceptable if the Borrower:

A Chapter 13 bankruptcy does not disqualify a Borrower from obtaining an FHA-insured Mortgage if at the time of case number assignment at least 12 months of the pay-out period under the bankruptcy has elapsed.
The Mortgagee must determine that during this time, the Borrower’s payment performance has been satisfactory and all required payments have been made on time; and the Borrower has received written permission from the bankruptcy court to enter into the mortgage transaction.

How Soon Can I Get a Fannie Mae Mortgage after Chapter 13 Bankruptcy?

Self-Employed Florida Cash Business Mortgage Lenders  We offer No Income verification and No Doc Florida mortgage lenders that allow you to purchase or refinance a primary Florida mortgage with NO tax returns, NO W2’s, NO 1099, and NO bank statements. Self-employed and or cash businesses are usually turned down by most banks and other mortgage …

How Do I Get a Bad Credit Florida Mortgage No Tax Returns?

How Do I Get a Bad Credit Florida Mortgage No Tax Returns? Read More »

Florida FHA Home Loans – FHA Mortgage Lenders Florida Florida-Mortgage-Lenders.com Serves FHA  In All Florida! Credit – Minimum 500 Credit score w 10% down or 3.5% down with min 580+ Credit score.Capacity- Maximum Debt to income ratio with FHA is 46.9 front end and  56.9% back end with AUS approval.Cash– Minimum 3.5% Down with 580+ …

How To Get A Florida Mortgage With ITIN Number and No Tax Returns? Some Florida ITIN Mortgage Lenders Allow Multiple SS Numbers OK! Mismatch SS numbers OK for mortgage qualifying  If you are undocumented with an ITIN seeking  Florida mortgage lenders and do not have a social security number we can help.  ITIN Florida mortgage …

Florida No Income verification mortgage programs. No No Doc, Florida No income verification mortgage program used to purchase a primary residence home or refinance your current primary residence mortgage. No employment, no tax returns, no W2s, no 1099’s, no bank statements for income. How and Who do No-Doc Florida mortgages work for? Most self-employed Florida …

Self-Employed Florida Mortgage Lenders  As the economy for self-employed and other small-business economies more, business owners are in need of self-employed financing but are often turned away because they don’t qualify with their tax return income Most Florida mortgage lenders and banks will require 2 years of tax returns along with a year to date …

FLORIDA NON-WARRANTABLE CONDO LENDERS – Warrantable vs Non-Warrantable Florida Condos  Thinking about buying a Florida condominium? The first thing you will need to determine is whether you are buying a “warrantable” or “non– warrantable” Florida condo. The only way to find out the financing on a Florida condo is to have a condo questionnaire completed if it’s not already …

Florida Jumbo Mortgage Lenders No Tax Returns Yes, you heard correctly! This jumbo Florida mortgage does not require Tax Returns!  You simply provide your most recent 12 or 24-month personal or business bank statements and we will calculate your income. If you are trying to buy a home but took too many business Tax deductions …

How do I Qualify For A Florida Mortgage Using 1099’s For Income? You must be employed in the same line of work or business for at least 2 years. We can then average your 2 years 1099 average with your year-to-date income!  We also need your most recent 2 months bank statement to document your …

How Do I get a Mortgage In Florida With No Tax Returns?

FLORIDA NO TAX RETURN MORTGAGE LENDERS How Do I get a Mortgage In Florida With No Tax Returns? If you are looking for a Florida mortgage because you are having a hard time verifying your income then you came to the right website. Florida mortgage lenders.com has many programs for borrowers that cannot show their …

How Do I get a Mortgage In Florida With No Tax Returns? Read More »

Florida Mortgage Lenders Use Bank Statements For Income! The Bank Statement Only mortgage is often the only option for self-employed borrowers to get the funding they need.  The bank statement-only mortgage uses business or personal bank statements to calculate income with NO TAX RETURNS NEEDED! Cash – Minimum 10% Down. Credit – Minimum 350 Credit score (case by case) …

Florida FHA Mortgage Lenders Requirments and FHA Loan Limits  Cash – Minimum 3.5% Down with 580+ Credit Score and seller paid closing cost up to 6%.Credit – Minimum 500 Credit score w 10% down or 3.5% down with min 580+ Credit score.Capacity – Maximum Debt to income ratio with FHA is 46.9 front end and  …

ALL INFOMORMATION IS FOR  EXAMPLE HYPOTHETICAL PURPOSES ONLY AND SHOULD NOT BE RELIED ON.